Featured on Voice of America (VOA)

Austin, Texas, October 27th, 2020 – Featured on Voice of America (VOA). Sharing some of my journey as storyteller and a woman filmmaker with VOA Indonesia (in Indonesian language) : https://www.voaindonesia.com/a/lydia-isnanto-diaspora-indonesia-pembuat-film-di-austin-texas/5637449.html 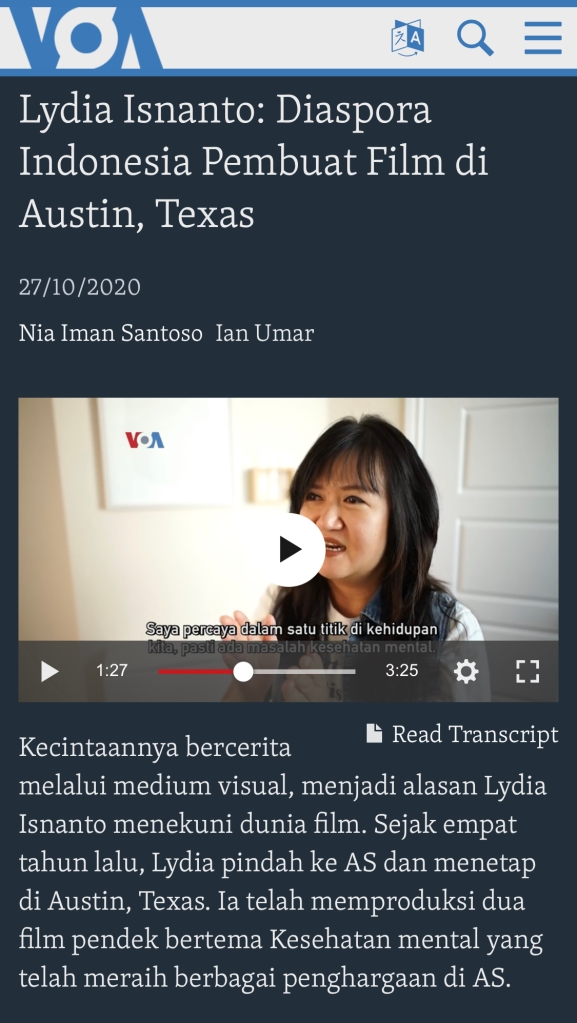 Austin, Texas, December 15th, 2019 – “This Is Me” cast and crew were at the Spotlite TV Show airing live at the Austin Film Society website https://www.austinfilm.org/austin-public/watch/ (channel 16.) Viewers in the Austin,Texas area also could watched the show LIVE ON AUSTIN CABLE TV companies Spectrum or Grande (channel 16), or on AT&T U-Verse (channel 99) and on Roku or Apple TV.
Director/Producer/Writer Lydia Isnanto talked about the inspiration behind This Is Me short film. Some of the incredible cast were part of the show. Actor Alvin Buckley, actress Jessica Brynn Cohen and actress Calli Jennings shared their experiences playing their characters in this short film. 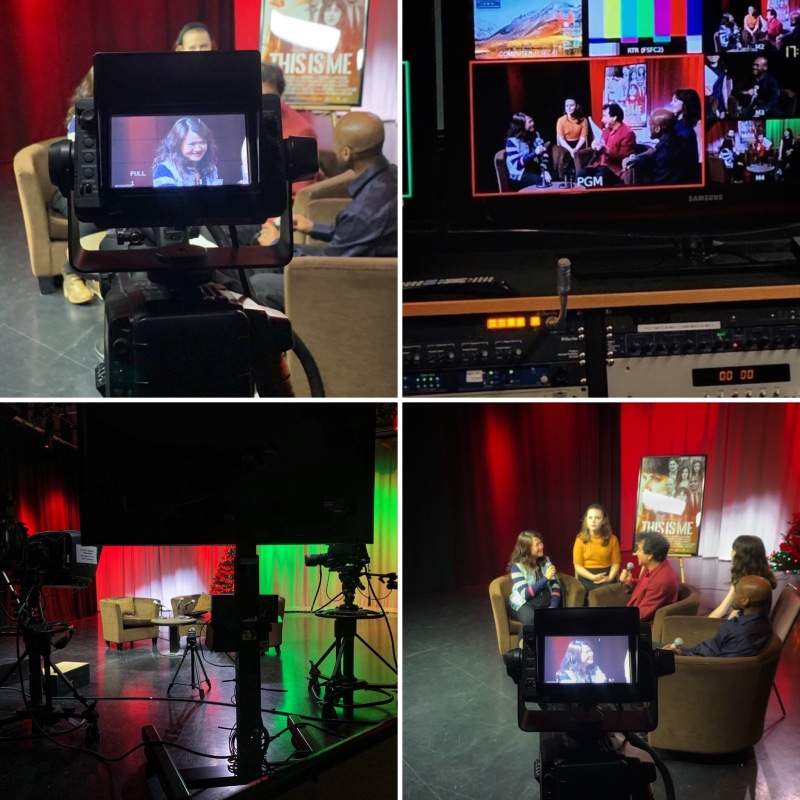 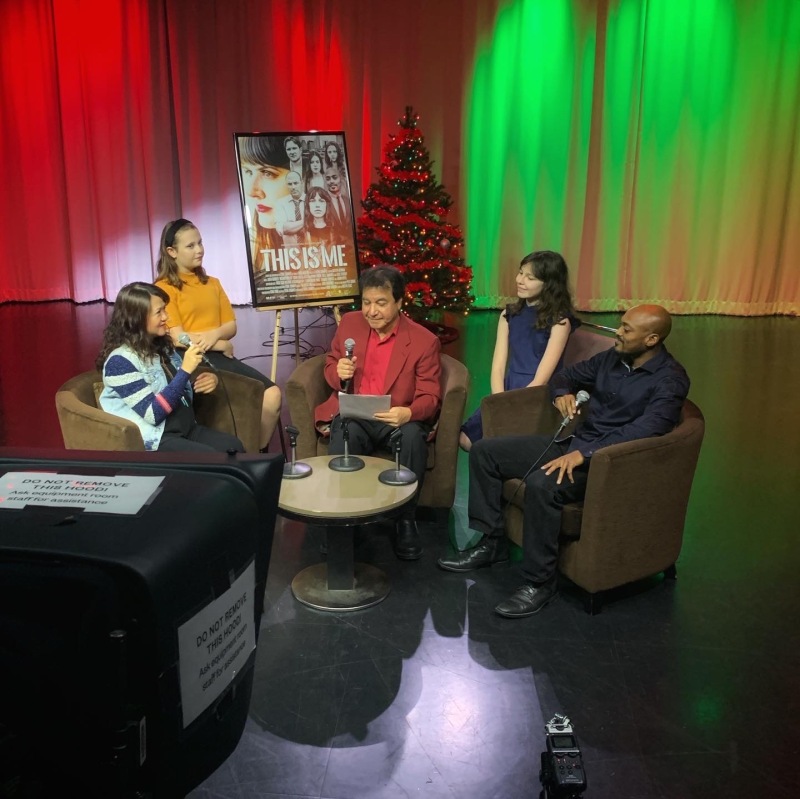 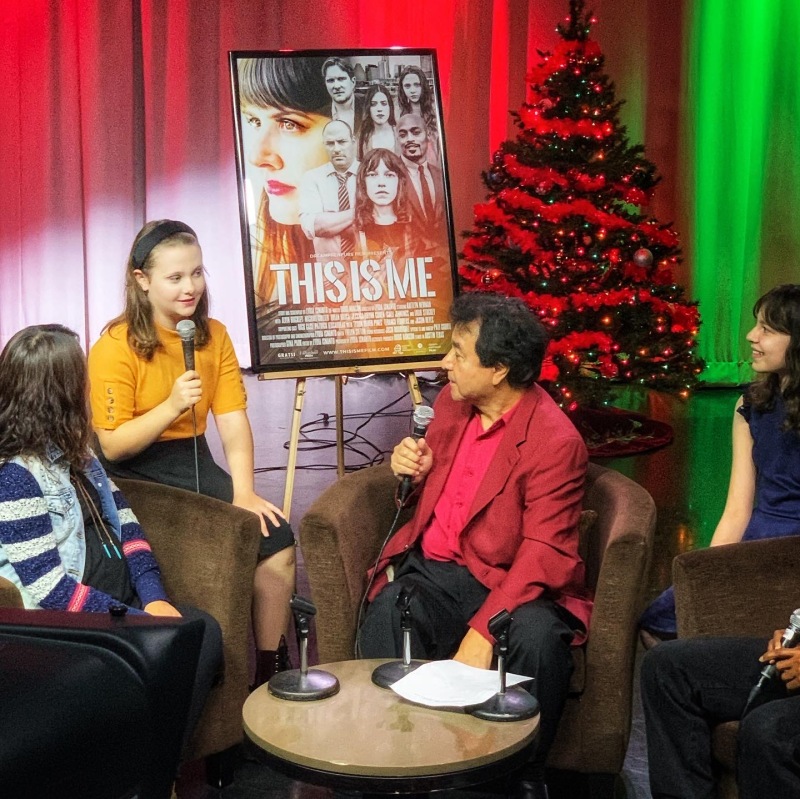 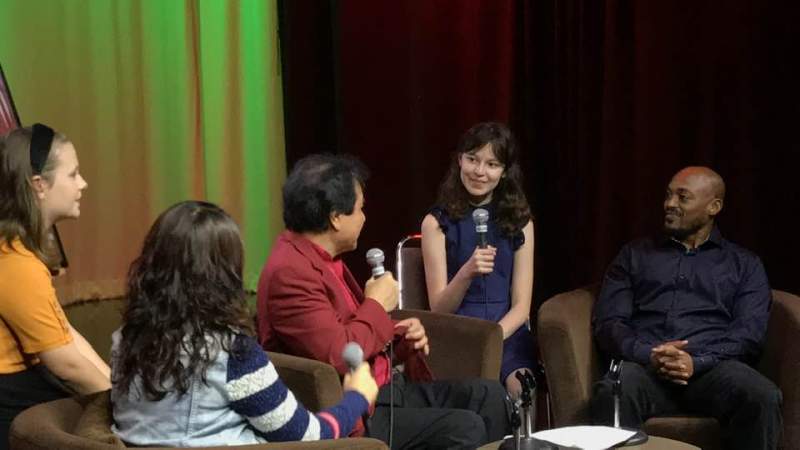 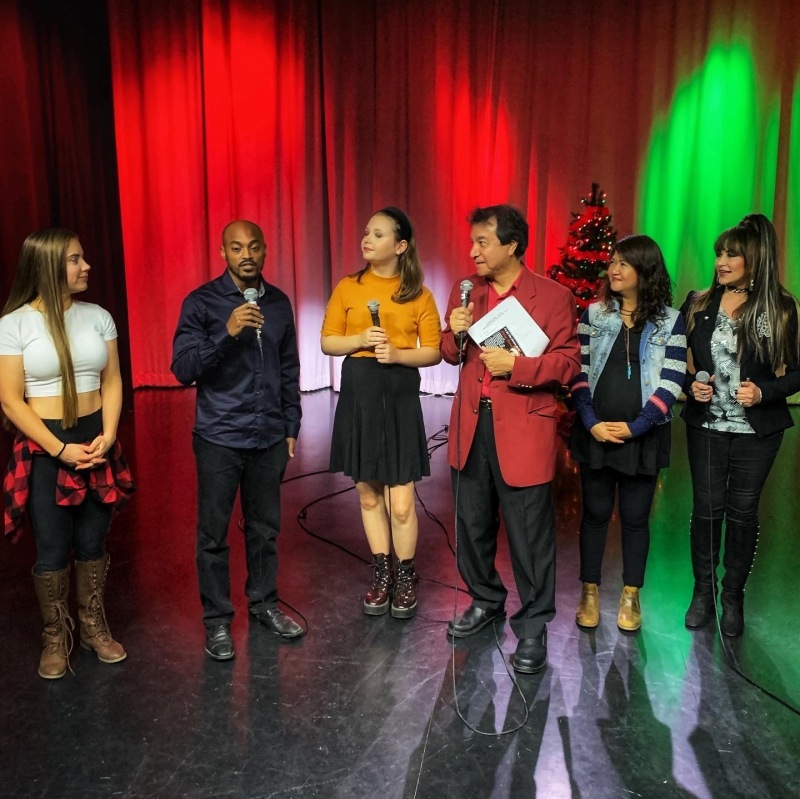 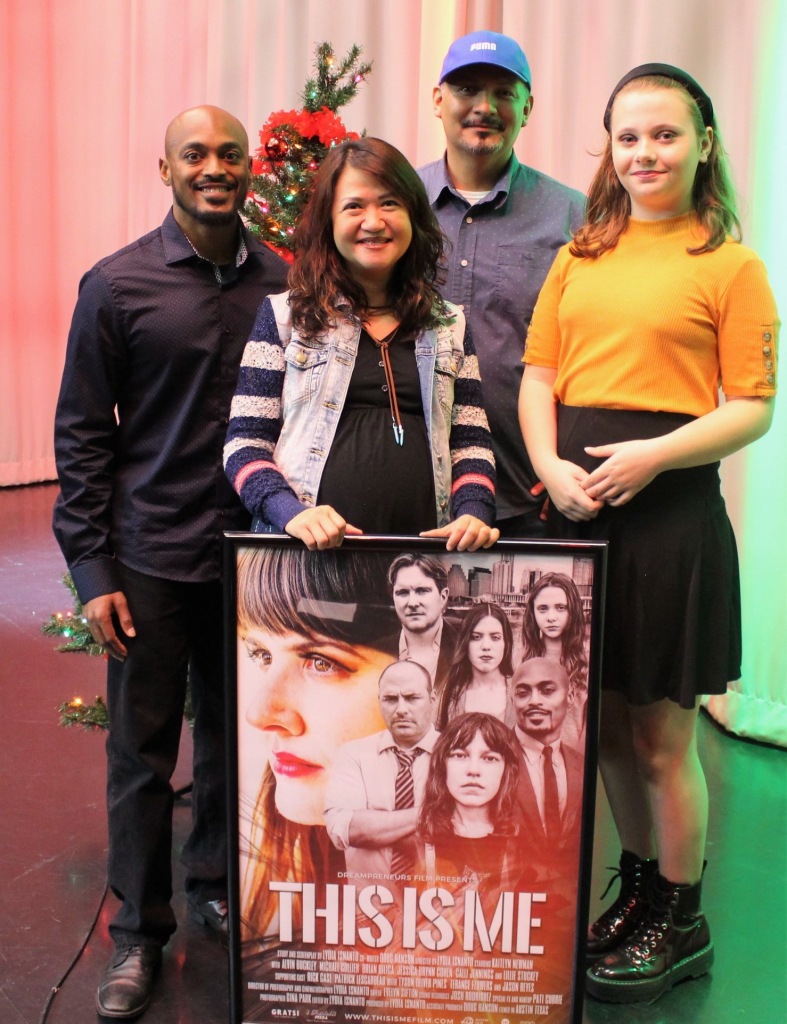 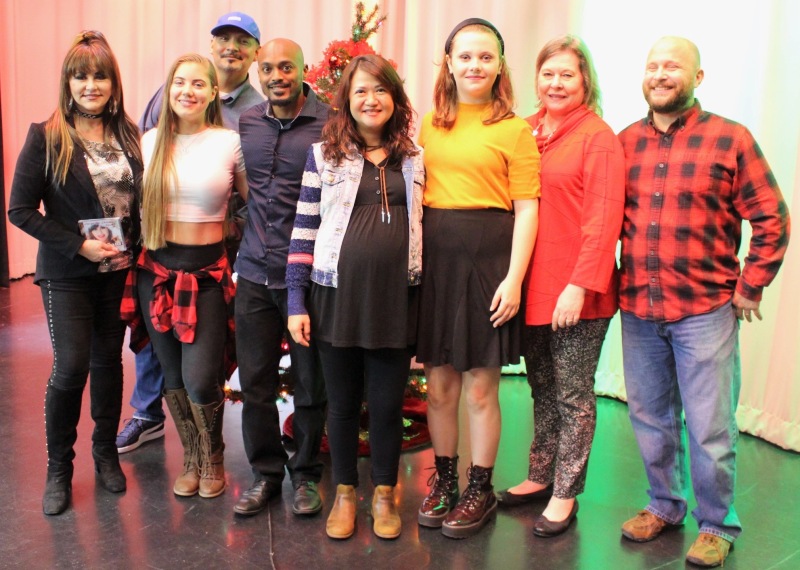 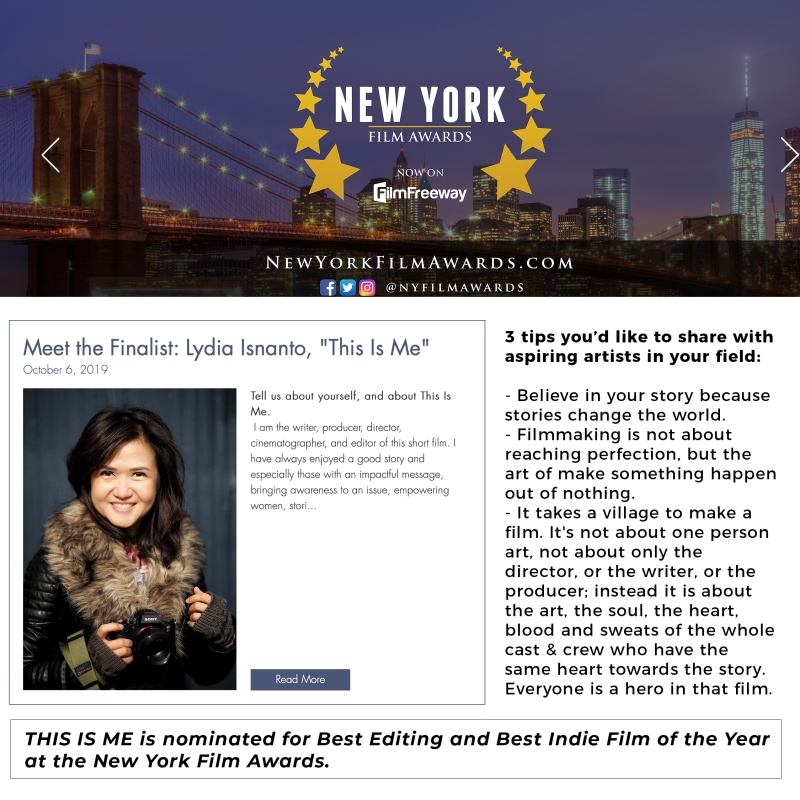 August 28th, 2019 – Lydia Isnanto was interviewed on the radio KOPN 89.5 FM Columbia Missouri with host Dick Dalton. We talked about THIS IS ME, which is a short film dealing with Mental Health and our needed compassion. You can listen at https://www.kopn.org/programs/glocal-news-in-social-artistry/?fbclid=IwAR1TYqUJgEXMTDdrhYUYYltYHZoFjRCoCkWoqdQtsjPbDFW1731IPQD8RsE. 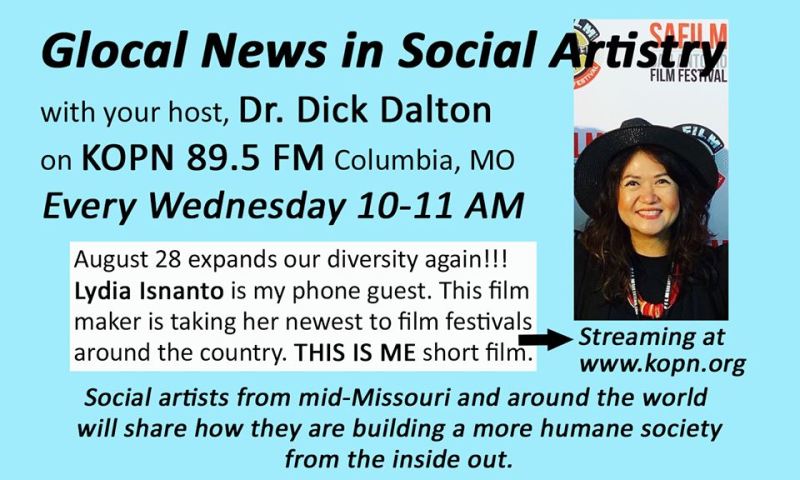 Podcast Interview at The Spa In Me with host Sandra Foreman 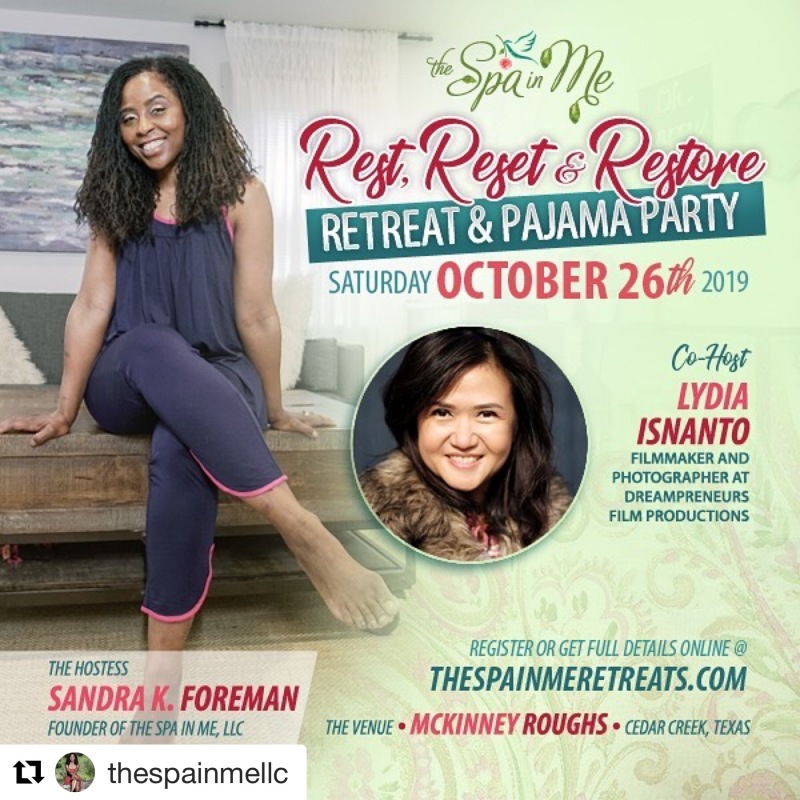 Cinemark Redwood Downtown 20, California, June 1-2, 2019 – Lydia Isnanto, Producer & Director of Short Film “This Is me” together with Actress Jessica Brynn Cohen were being interviewed by Cindy Maram from Dig In Magazine and Rodrigo Moraes from Bay Area Spotlight during the BRAVEMAKER film festival red carpet promoting mental health awareness. 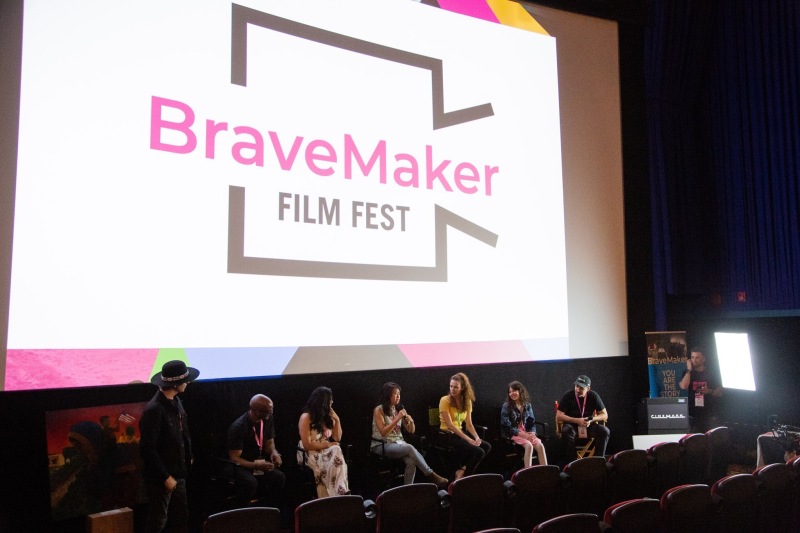 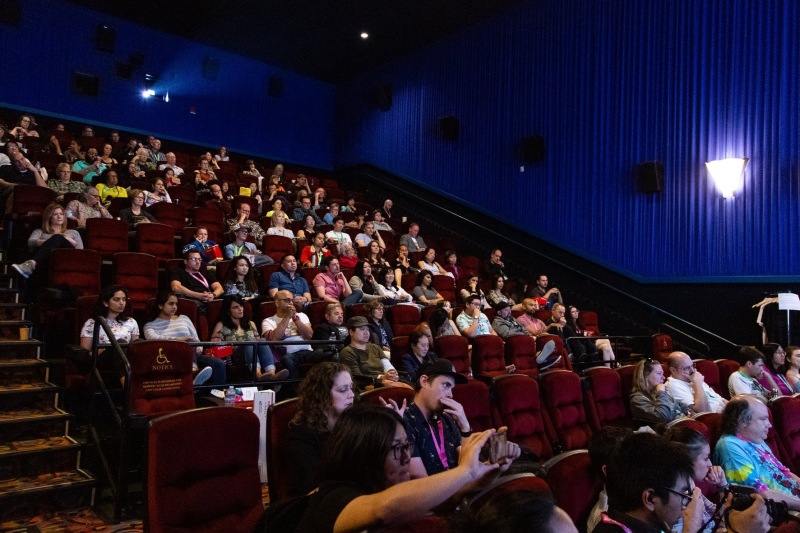 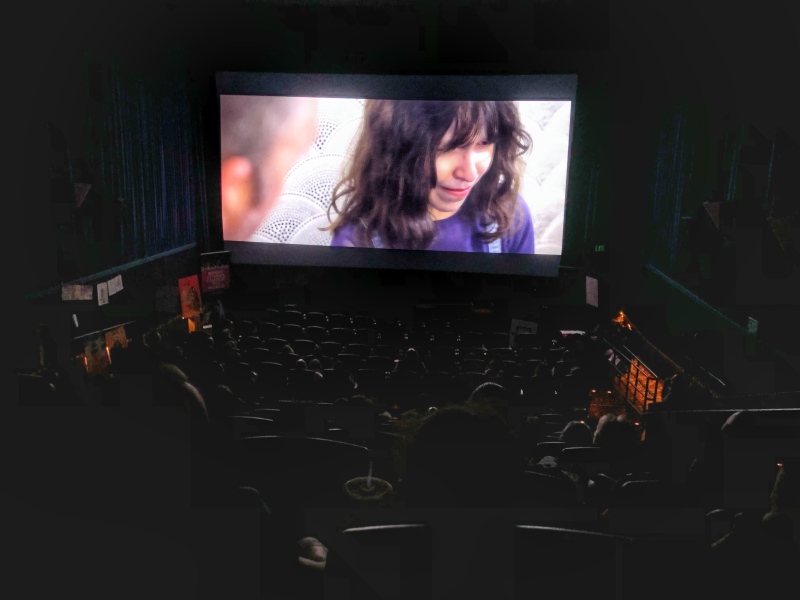 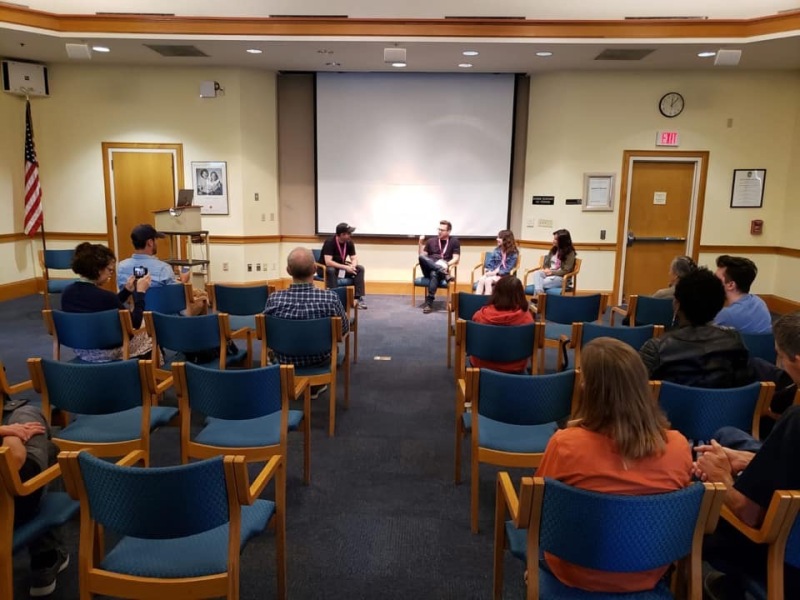 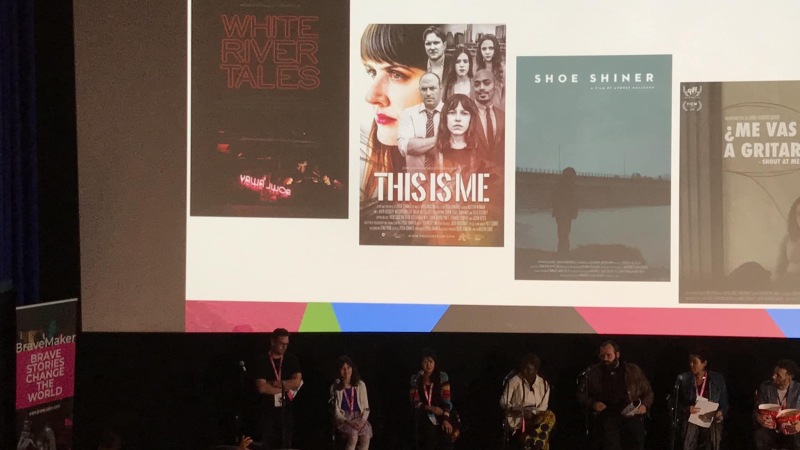 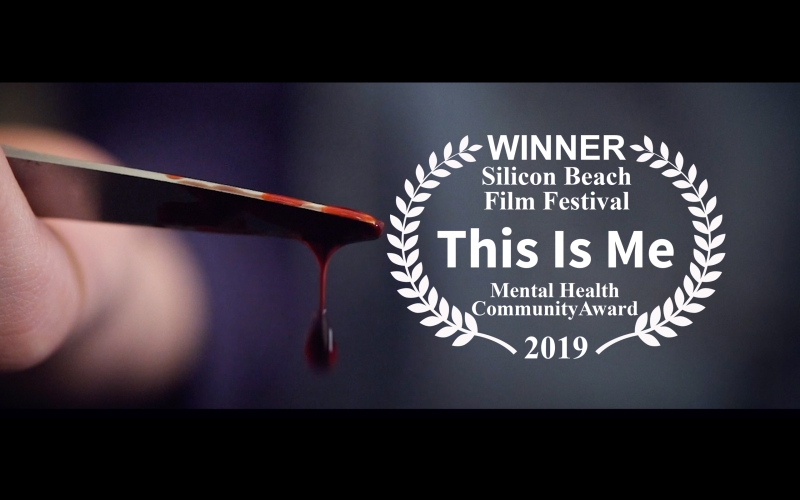 This Is Me short film also featured as one of the highlights from the 2019 Silicon Beach Film Festival that screens over 300 independent films from around the world listing film festival highlights : https://www.pr.com/press-release/787637

Featured on Austin Film Project’s “Filmmaker of the Week”

Austin, November 14th 2018 – Lydia Isnanto “Dreampreneur” – Lydia Isnanto is truly one-of-a-kind. Born in Indonesia, she moved to Singapore, where she was a business owner for 15 years before deciding to continue her journey on to the US. First in San Francisco, then to Austin to follow her passion of capturing images and telling stories. Balancing being a business woman and an artist is a challenge she willingly took on, focusing on earning enough income for both herself and to finance her craft. And it is a challenge she not only took on, but truly succeeded at: her films have gone on to win multiple awards all while she successfully created a multinational video and photography business! 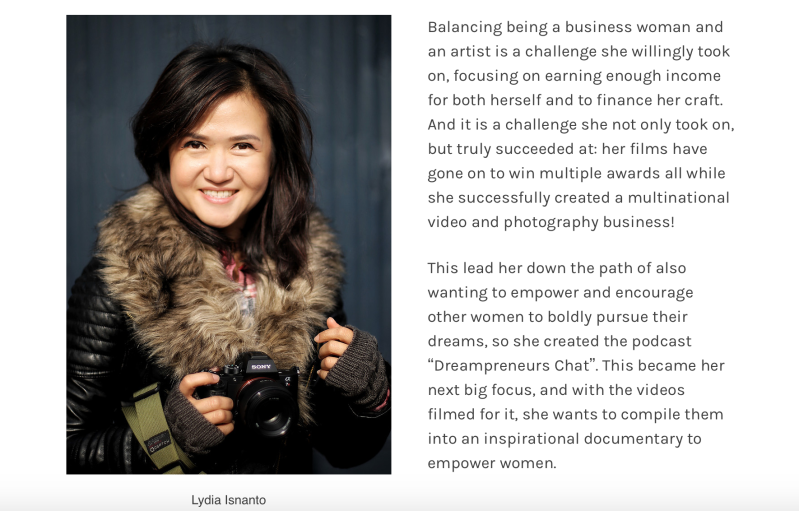 Featured at LEILA MAY 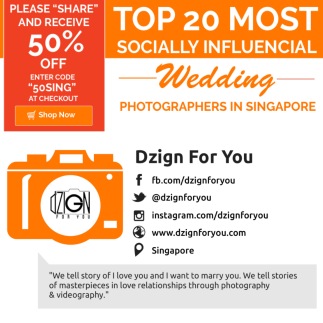 Very honoured to be selected as one of the Top 20 most socially influential wedding photographers here in Singapore by Leila May. Proud of every team in d’ZIGN for you as we have always been striving to be the best at the top and continuously giving our best with skillful photography technology and talents to our dearest clients.

Wedding Drone Videography Singapore, has been in our mind for sometime before we launched it. When we proposed a special one hour fun shoot with drone aerial view, gladly Hock & Applie was excited and accepted the challenge. There were few venues consideration such as Sentosa Beach, Chinese Garden and Jurong Park as part of their wedding day itinerary. We did survey and tested the drone at these venues except Jurong Park where there is a sign of no aerial activity. After tested at Chinese Garden, we found that the bridge is gonna be super awesome. And despite all the hard work… there’s no greater satisfaction than knowing that our work and masterpiece has brought an unforgettable happiness, memories & satisfaction to our Clients. Thank you so much to our superb couple Hock & Applie for your trust and the wonderful testimony you have shared with The Straits Times newspaper about us. We are honored!

As written by Bryna Singh on The Straits Times sundaylife!
Another happy customer is airport operations manager Chua Ching Hock, 30, whose wedding video incorporated drone shots by videography company d’ZIGN for you. He was filmed from the top kissing his bride-to-be in their wedding car and dancing with their team of groomsmen and bridesmaid.
“We called the drone a wasp and kept laughing every time it was overhead,” he says. “We ended up being very relaxed during the shoot and looked really happy on camera.” 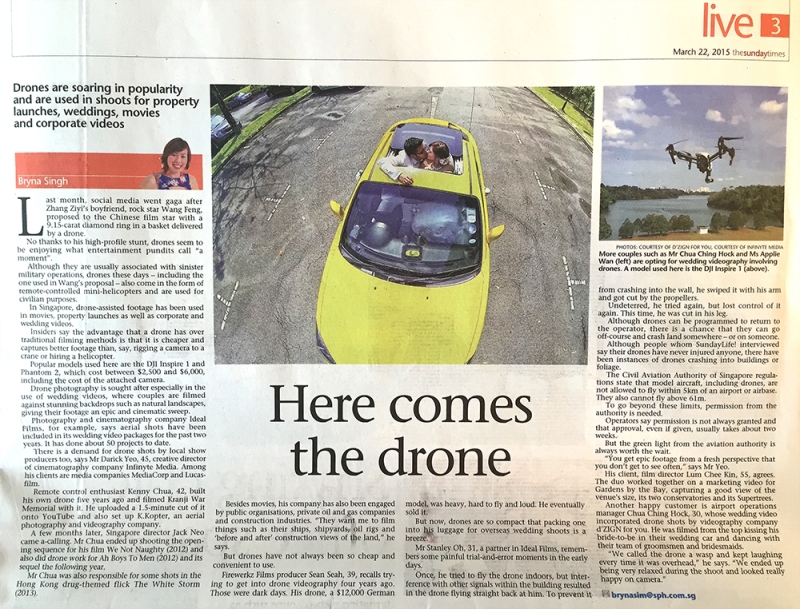 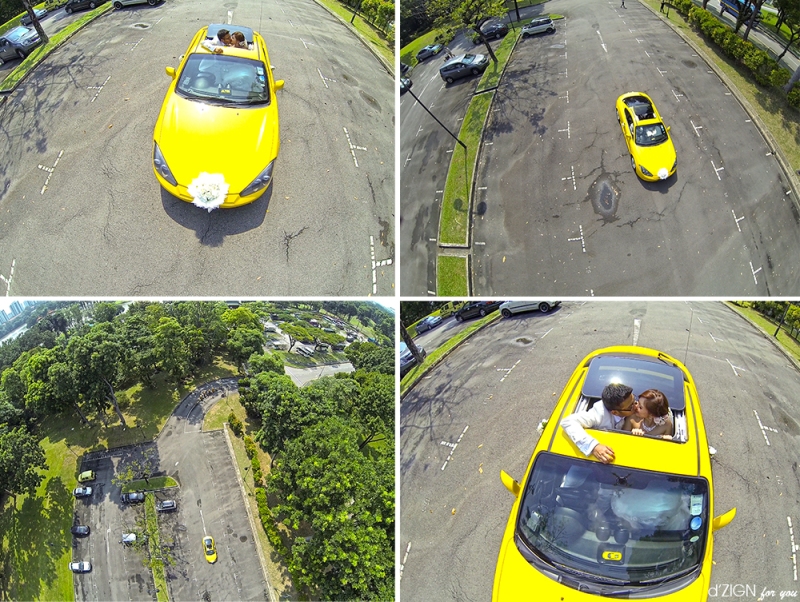 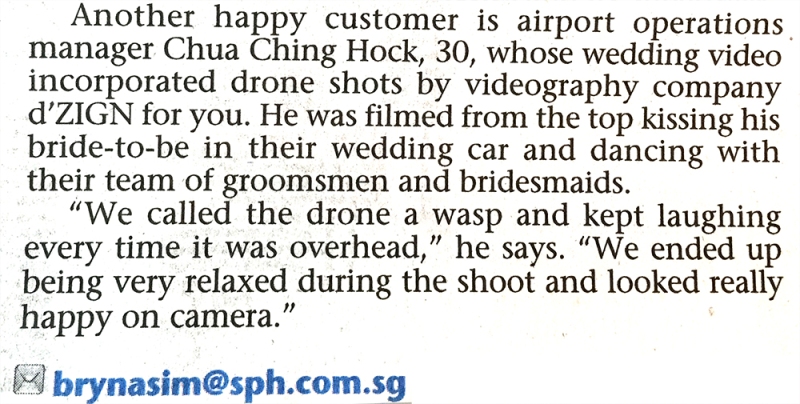 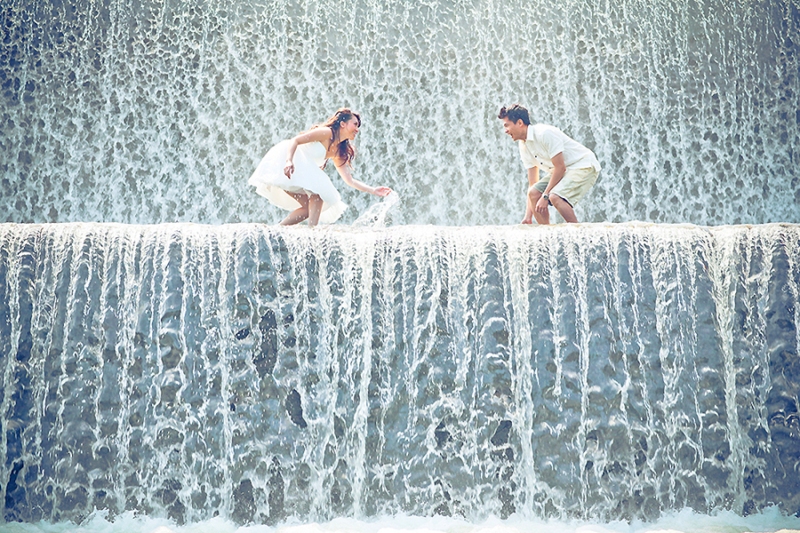 Featured as one THE BEST OF THE BEST in TOWN in Blissful Brides Magazine (Jan-Jun 2012)
Click here to view more : http://dzignforyou.wordpress.com/2012/01/16/dzign-for-you-featured-in-blissful-brides-magazine/ 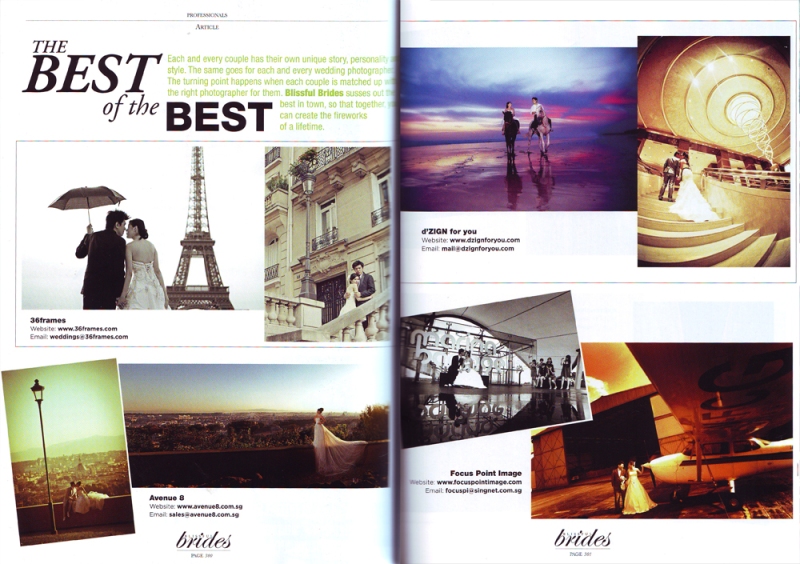 Tell us about yourself, how did you actually started out in this business? Lydia: There is love happening around us everyday.. on the streets, in the mall, beach…everywhere. My passion is to discover these through photography and videography every single day. This business started through videography. I did a few montage and love story video clips. Slowly I expanded my expertise into capturing wedding days with both videography and photography. It amazes me to discover how love can be captured in photographs and videos. They truly can speak a thousand words. 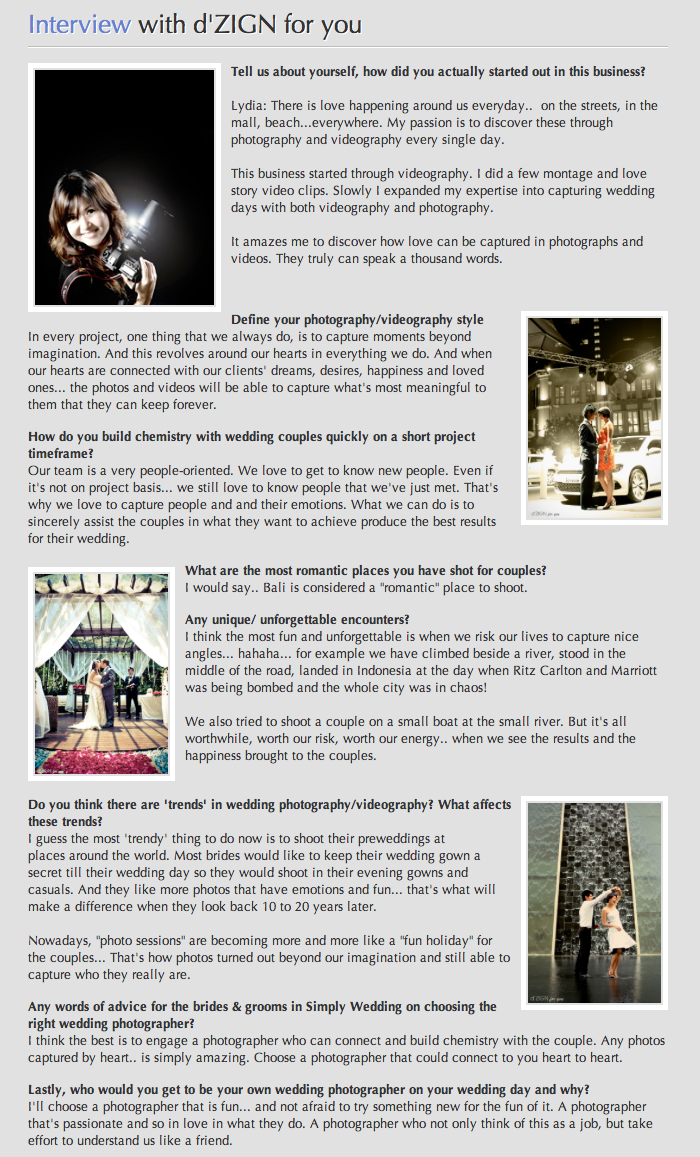 Cupid With A Camera Behind every wedding there is a story. Lydia Isnanto uncovers it and tells the story in images. “The love story of a couple gives me the inspiration for the concept behind the video. We want to capture the most meaningful moments for each couple. Each story is unique and we have to look at it differently—there is no fixed template for a wedding video.” Lydia Isnanto, is the antithesis of the typical “creative director”: she is cheerful, generous, kind and yes, creative and resourceful. These attributes give her the ability to unlock that unique story behind the coming together of a couple, and to use different concepts and angles to create one-of-a-kind photo albums and wedding videos for each of her clients…. Check this out for more : http://www.citynews.sg/2011/10/cupid-with-a-camera/ 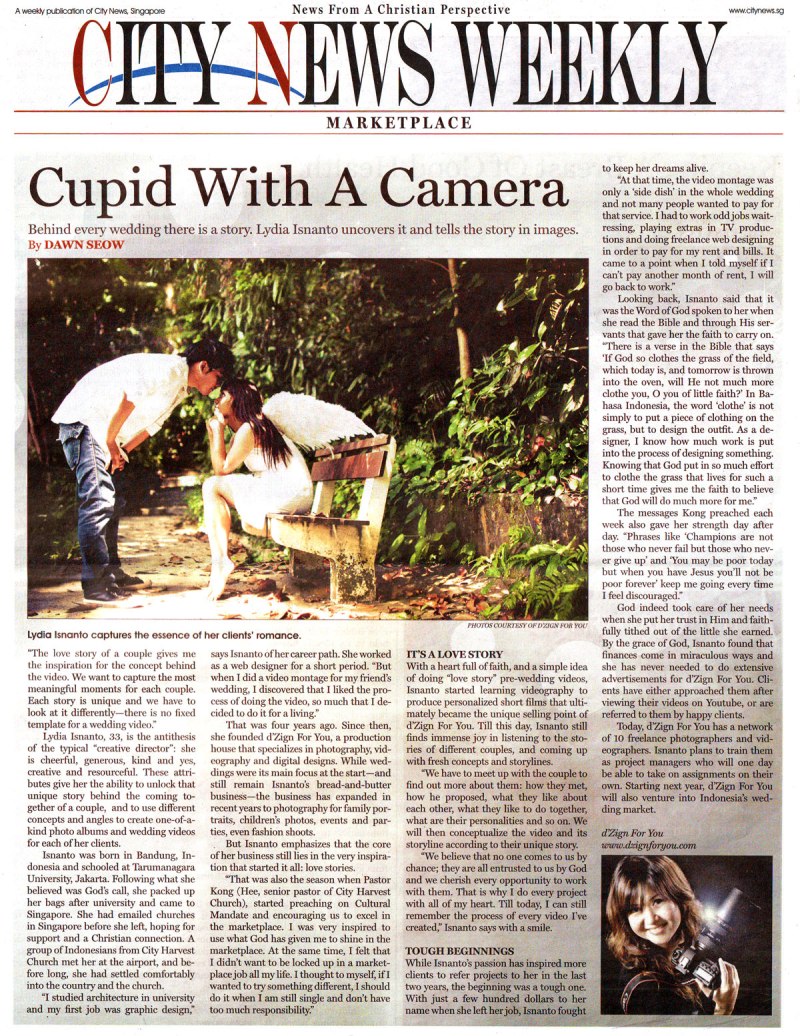 ONE of TOP 100 MOST INSPIRING REAL WOMEN on 12 March 2011, organized by CozyCot International Women’s Day

Selected as one of TOP 100 MOST INSPIRING REAL WOMEN on 12 March 2011, organized by CozyCot International Women’s Day. 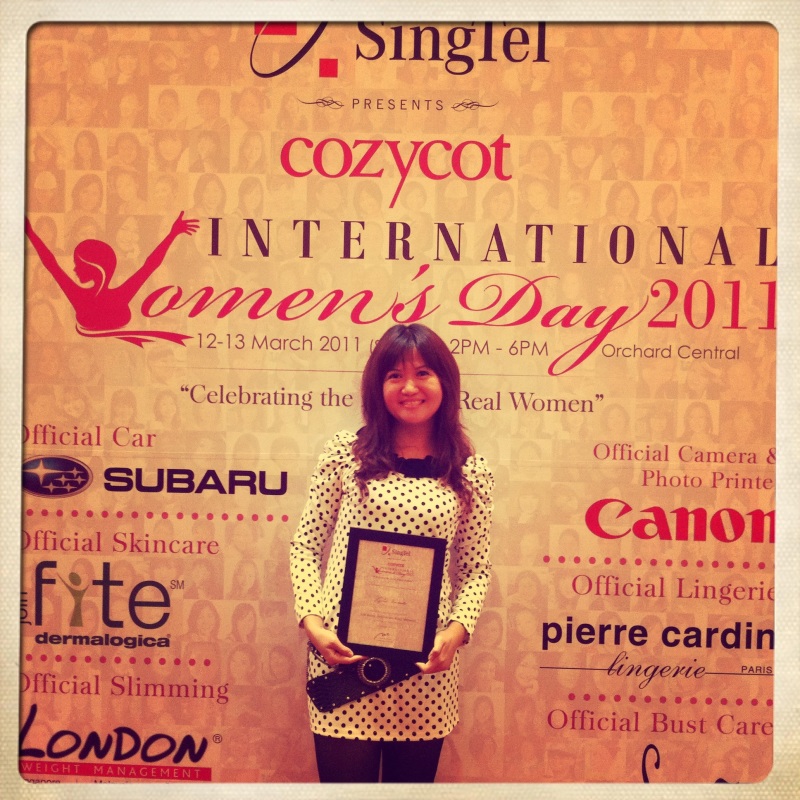 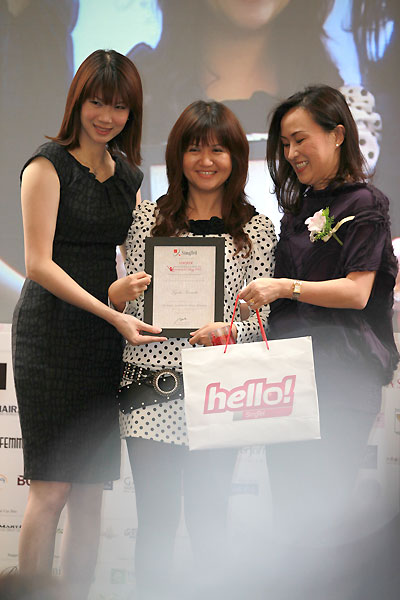 Igniting The Passion As a creative soul, Lydia is motivated by the surprises each new day brings. As an eager individual, Lydia’s zealous attitude has her travelling and meeting people as she strides on a discovery path of new ideas. As a passionate photographer, Lydia is inspired by the essence of life itself. Lydia is the founder of “d’ZIGN for you” – her instrument of wedding inspirations for the past 3 years. She shares her love for wedding photography openly as she captures the still frames of loving, blissful couples. Initially, she had dabbled in creating wedding videos for friends that had consistently garnered praise. So from then on, Lydia has since followed her heart and never looked back. How does Lydia work? Check this out for more : http://dzignforyou.wordpress.com/2009/03/30/extraordinary-interview/ 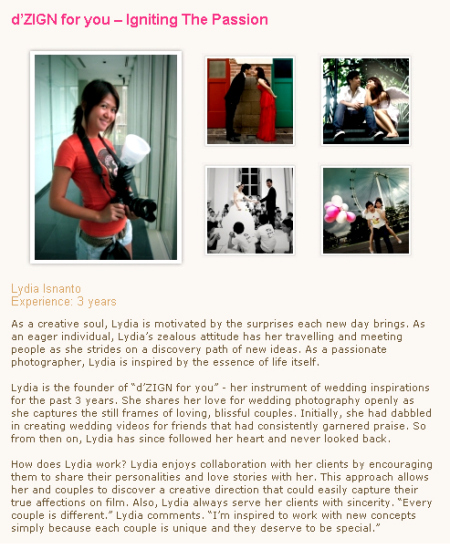